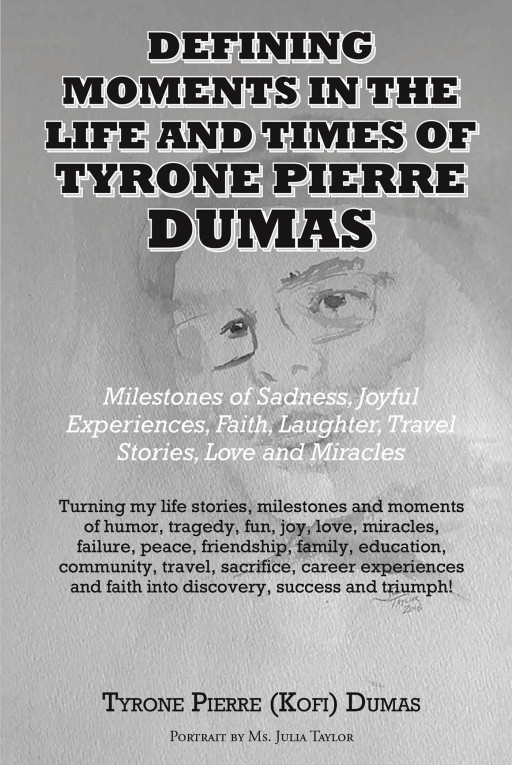 
Fulton Books author Tyrone Pierre (Kofi) Dumas, a dedicated man, has completed his most recent book "Defining Moments in the Life & Times of Tyrone Pierre Dumas": a heartening journey of courage, growth, and change. Tyrone Pierre Dumas looks back on the crucial moments and amazing people that greatly influenced his life. This is a story of a man who did not let his race nor culture hinder him from achieving success.

Dumas shares, "My life and times have taken many twists and turns.

"When I was in grade school, at Twelfth Street School, I thought I was going to be a piano player after taking lessons because we had to have a piano at home for me to practice that did not last long. In junior high school at Robert Fulton Junior High, I fell in love with playing the drums and really got good at it. My mom broke down and purchased me a set of drums and even got our community's great drummers to teach me. Victor Sword was jazz drummer, and Vic Pitts was a drummer with the Seven Sounds R&B group. I learned so much from them and thought I would play in a band one day.

"In junior high I also fell in love with design and drafting in drafting class with the added learning in metal shop and carpentry class. Using my hand was one of the common things about all those possible career choices. The piano and the drum made noise while I could sit for hours with a pencil/pen and draw. By 1970-71, while in my first year of college, I settled on architecture. I quit when I found no time to practice as my studies and assignments started to take all my time.

"I should add that along with my college work and study requirements, I found some friends and girls who became a part of my new priorities. As a Black first-generation college student, I lost my mind while partying with my brotherhood and sisterhood most of the week and weekends. I also found love in all that chaos when I met my future wife Ceceil Dumas, and we had kids, while starting a family in 1972-73. She has been my wife now for forty-nine years, and she was a major part of my success and career.

"Life changed again as I figured out that many sacrifices would have to take center stage in pursuit of completing college. I started college at MATC (Milwaukee Area Technical College) in 1970, and in 1973/74, I was admitted into UWM (University of WI-Milwaukee) School of Architecture. I was so in the groove to get my degree. During a two-year period (1973-1975), I decided to finish up at MATC part-time to get my associate's degree, while attending UWM full-time from 1973 to 1977 to get my bachelor's degree.

"For a two-year period, I attended both day and night schools, worked PT jobs and work study jobs, and participated in the raising of our two children while my wife worked full-time. I had quit drinking, partying, and smoking after I got married and was needing some mental-health stability, which I found in 1974, when I started doing stand-up comedy, as inspired by comedian Richard Pryor.

"The rest is history, as I achieved all my goals by getting both my associate and bachelor's degrees, with the intervention of my Lord and Savior/God during all the times I thought I could not make it. In fact, during the times I wanted to quit, my wife would call my mother and my mother-in-law, and I would go to sit with them and get the words of wisdom from these angels for support.

"There were other significant help and support during my career launch from the beginning until now.

"Ms. Margaret Garner-Thompson gave me the money to pay my MATC tuition in 1970. Mr. Prentice McKinney told me about student financial aid, which allowed me to pay for my college years. Dr. Earnest Spaights, Rachel Seymore, Clara New, Paul Pettie, Dr. Sandra Moore, and many others at UWM and MATC helped me clarify purpose and meaning in my life from 1970 to 1977.

"Triumph the Church of God in Christ became a foundation of faith while in college where Aunt Red, Reverend Buck, Queenie, and my mother-in-law, Hagar Harrel, lifted me up to do well as they worked to build a new church and they added me to the design committee. My school time, life, and family got an intervention-based boost from these angels, sent by God.

"My sister Sharon was married with her family at that time while my brother Anthony was in the US Navy. My grandmother, Grandcheer/Arvella Twine, was always cheering for me from her home in Fordyce, Arkansas, where I spent my summers as a kid.

"I am a product of my family, good people, friends, neighborhoods and community, which allowed the moments of my life to happen!

"Life for me is comparable to the alphabet, with A being the beginning of life (born date) and Z being the end of life (death). The real life and book you write is done in the B through Y. The many chapters are written by you and all those members of your family whom you have impacted. The chapters of the book continue to be written even when you have passed on and become an ancestor by your family members and friends. As an ancestor, every time your name is remembered, spoken, or thought about, you still live in love, peace, faith, and spirit within those still writing their book chapters!"

Published by Fulton Books, Tyrone Pierre (Kofi) Dumas' book is an intimate and empowering volume that will make readers cry, laugh, and think. His life story is a great testimony that anything is possible if God resides in one's heart.

May this read bring hope and inspiration to everyone.

Readers who wish to experience this potent work can purchase "Defining Moments in the Life & Times of Tyrone Pierre Dumas" at bookstores everywhere, or online at the Apple iTunes Store, Amazon, Google Play or Barnes & Noble.