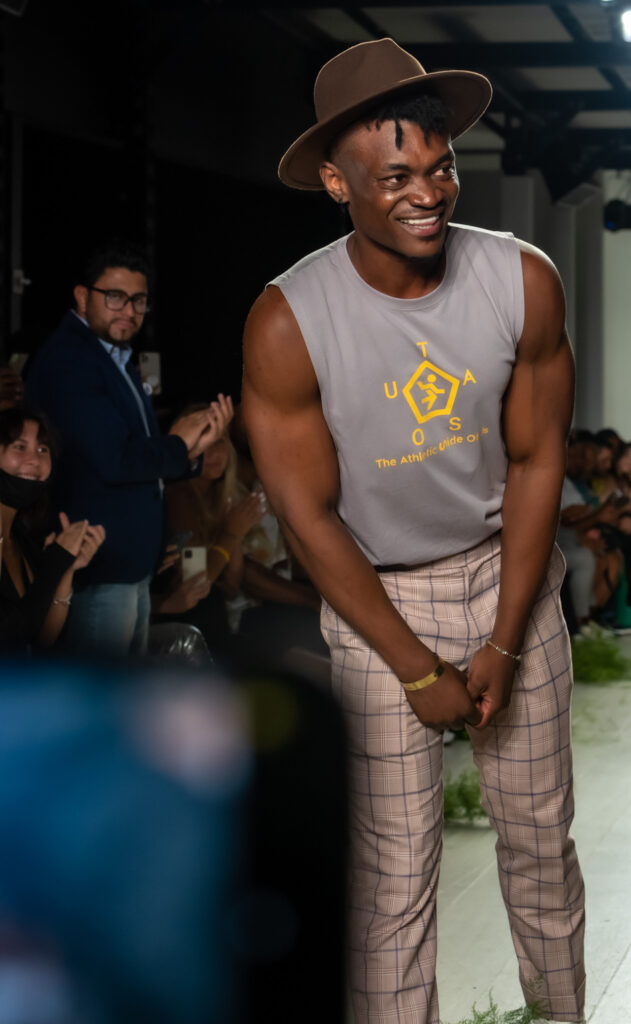 The S/S 2022 collection from The Athletic Side of Us (TASOU) features menswear and womenswear by designer Chuks Collins. Set in the Ancient Benin Kingdom where transitional fashion meets this ancient civilization from southern Nigeria. Designed for everyday life, its streetwear meets athletic wear with a couture sensibility. As a brand that celebrates the athletic side of humans, TASOU relates the human experience with functional clothing that also focuses on sustainability by being eco-forward.

My idea was to do something very forward and comfortable thats easy to wear, but also very summery and upbeat at the same time. My menswear is inspired by me and what I think about when I pack a backpack for a few days trip,

The two philosophies of Art Self and Act Self- act as the foundation of this collection; expressions of the soul acting in congruence with expressions of the mind and body. Looks are meant to be functional, fluid, and forward, that work for both men and women to fit the human experience. The TASOU Graffiti set for men, shorts and top set can be worn for any activity. The shorts can be worn for an outing, running, swimming, or just staying at home to lounge around.

Collins has also focused this collection to give back to those who desire to be athletic but have been limited due to limb deficiencies. To support the Act Self philosophy, the brand is facilitating a new way forward for those whose mobility has been limited and proceeds from the collection will go towards providing sustainable prosthetic limbs to children in Nigeria, through TASOUs partnering organization The Irede Foundation.

TASOUs debut allowed for Collins to present his fresh point of view and introduce the bridging of streetwear and activewear. The brand seeks to not only create looks that are stylish and feel good, but that is also good for the planet. All pieces of the collection are made sustainably with low carbon outputs from materials such as plastic bottles, organic cotton, hemp, and repurposed fishnets.

This lost kingdom of Benin occupied southern Nigeria and was founded by the Edo people. It was a kingdom that flourished from the 13th to 19th centuries and was a major hub of trade, functioning under relations with Portuguese traders wanting gold and slaves. In the 18th century, the kingdom began to decline due to civil wars and ultimately was conquered by the British in 1897. Their contribution to the modern world is the former kingdoms production of brass sculptures and the most intricate artwork that the African continent has ever seen.

Chuks Collins is the founder and crafter of TASOU and his idea was to create something thats more than an athleisure company. TASOU is a brand where the dynamic fluidity of life evolves the athletic nature of people. Everything that we are is our Art Self and what we do with our roles in society is our Act Self. And through the brand, Collins has created looks where people can choose the athletic side of themselves.

Created to debunk the cultural box of what activewear can mean, Collins is bringing the world of fashion and essential accessories forward into aspects of everyday life. Through functionality, life is being incorporated into TASOUs collection along with the sleek streets of New York City and his native Nigeria.

The Irede Foundation (TIF) is a foundation that continues to inspire actions so that child amputees and their families can live independent and limitless lives through the 4 pillars of Educate, Empower, Inspire and Innovate. They educate members of the public on issues concerning disability through advocacies and sensitization programs. They empower clients with mobility aids so that they can live their lives free of limitations. They inspire actions through partnership and engagement with government and corporate stakeholders to ensure that persons with disabilities are not left behind. And they innovate by creating tools and services that enable an inclusive society for persons with disabilities.