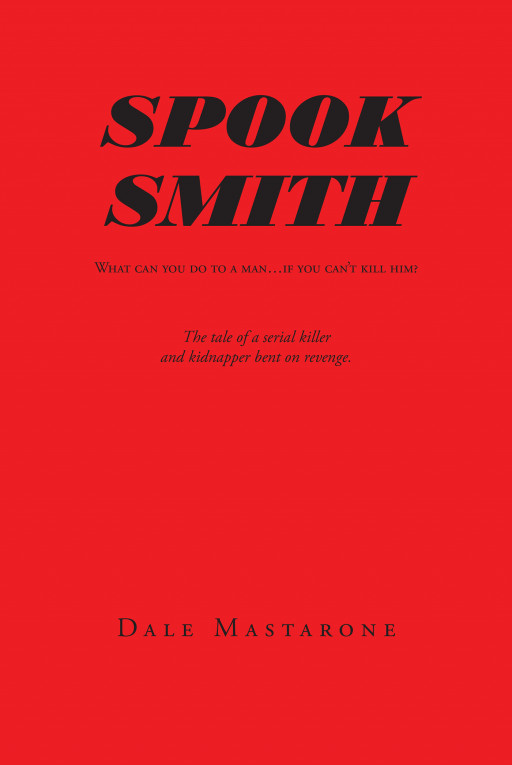 Fulton Books author Dale Mastarone, who served active duty in the United States Army, and worked as junior radio mechanic, senior radio mechanic, and communications sergeant in his mechanized infantry company, and later studied constitutional law and court procedure, becoming a paralegal, has completed his most recent book "Spook Smith": a captivating thriller following a CIA Agent's trail of revenge after his illegal side business is destroyed.

"The Central Intelligence Agency (CIA) consists of highly trained agents used by our federal government for a variety of purposes, spying on foreign governments at the top of the list," writes Mastarone. "Many times the operatives are called spooks because they have an invisible image, just like ghosts. The vast majority of CIA agents abide by the law of the land and their sworn oath to uphold and live up to it—but some few do not.

"One certain CIA agent swore an oath at one time that he kept. He swore that he would get more than even with that team of military police officers that interfered in an illegal drug-smuggling operation he was carrying out for personal gain. They would pay with their lives if they exposed him. His coconspirators reached all the way up into the White House, and he was given protection from prosecution. He was taken off CIA payroll, but that did not trouble him—he had already been working for a major criminal enterprise operating internationally and domestically, making megabucks! Among other evil deeds, he was heading up an operation of kidnapping young attractive girls for sale to foreign dignitaries to install in their harems. One girl he kidnapped and sold to a Saudi prince for a million dollars escaped the harem and found her way back to the USA, reported the crime to the FBI using a fake name for herself—then disappeared. She just happened to be the baby sister of the key man who interfered in Spook Smith's drug-smuggling enterprise.

"Because she escaped, there was a hit order on her life. Was Spook Smith able to find her and kill her as he was ordered to do?"

Published by Fulton Books, Dale Mastarone's expertly paced and engaging book will leave readers on the edge of their seats with incredible suspense and a shocking finale that will stay with readers long after its conclusion.

Readers who wish to experience this mesmerizing work can purchase "Spook Smith" at bookstores everywhere, or online at the Apple iTunes Store, Amazon, Google Play, or Barnes & Noble.

Original Source: Dale Mastarone's New Book 'Spook Smith' is the Story of a CIA Agent Gone Rogue Who Seeks Out Revenge on Those Who Interrupted His Illegal Business Dealings

Purple Foxy - December 2, 2022
Previous articleCarol Kauffman’s New Book ‘Crystal Child: The Diamond Star Saga’ is a Gripping Fantasy Following a Young Girl Who Must Accept Her New Destiny to Save Humanity
Next articleAuthor Dr. Jennifer Dieu, DNP, ARNP-BC’s, New Book ‘My Bariatric Journey: From Hefty to Healthy’ is a Resource and Tool for Bariatric Patients