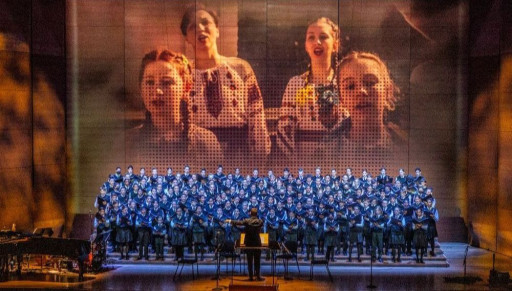 Inspired by powerful experiences over the past year, the NCC chose to curate a deeply meaningful season that celebrates the power and potential of the human voice. "In planning Resounding Voices, we looked back with reverence at our Lincoln Center collaboration in May with the Ukrainian Zhayvir Choir. Performing Eric Whitacre's Sing Gently in a half-live, half-digital immersive rendition of the piece that transported the audience to the streets of Lviv, our students from around the country joined hearts and voices with children from thousands of miles away, unified by our artistry and vision for a peaceful world," said Artistic Director Luke McEndarfer. "In reflecting on that experience, and watching the world around us, our team agreed that voices truly matter; that speaking up is important; and when enough people join their voices behind something great they believe in, it shapes and changes our world for the better."

Beginning a full year of unique and unprecedented artistic initiatives, the National Children's Chorus in September released its first major album on the Lexicon Classics label, featuring the poignant opera Brundibár, by Czech composer Hans Krása. Captured on smartphones by students and chamber orchestra across the country during quarantine in 2020, this magical recording can be streamed and enjoyed on Spotify and Apple Music. Written in 1938 and performed by youth in the Theresienstadt concentration camp from 1943-1944, the story of Brundibár celebrates the power of voices joining together in the name of justice and righteousness, ultimately prevailing over tyranny through the lens of a children's fairytale.

Throughout December, students in all seven of the NCC's Chapter Cities will celebrate the holidays with winter performances in Los Angeles, New York, Washington, D.C., San Francisco, Austin, Dallas, and Boston. Drawing from more than 1,000 choristers nationwide, each performance will feature a mixture of voices from various cities, as the children share their musical achievements and make new friends along the way. A special appearance at Macy's Herald Square in Manhattan, in addition to debut concerts in Dallas and Boston, headline the chorus' list of festivities.

Repertoire for the NCC's advanced Senior Division includes music that will be recorded in the summer of 2023 as the organization creates its first-ever holiday album, offering heartfelt expressions of the season from more than 15 cultures and traditions around the globe. The world premiere of Himig Pasko, commissioned by the NCC and written by Filipino-American composer George G. Hernandez, continues the chorus' tradition of expanding the art form and solidifies its commitment to presenting music that reflects the rich diversity of its expansive membership. The Junior Division, comprised of students as young as five, will proudly sing eclectic programs, with each level challenged through exposure to new languages, sophisticated voice leading, and harmonic textures.

In February, the National Children's Chorus excitedly takes the stage at Walt Disney Concert Hall in a tour de force concert performance, presented by the Los Angeles Philharmonic in collaboration with the American Youth Symphony. Under the baton of Maestro Carlos Izcaray, the NCC will sing Benjamin Britten's colossal and deeply moving War Requiem. This work, completed in 1962, is considered to be one of the most significant pieces ever written for chorus, soloists and orchestra, as it depicts the haunting atrocities of warfare in the hopes of signifying the importance of global unity.

In mid-April, the National Children's Chorus will perform in the National Cherry Blossom Festival Parade in Washington, D.C. The event will be the NCC's 4th appearance in what has now become an annual tradition, featuring students from around the country who greatly value participating in one of the city's most vibrant and exciting community celebrations. Televised across the nation, participants will sing rousing selections under the baton of NCC Principal Conductor Dr. Allan Laiño.

In May, students will bring this journey to a grand culmination of performances, once again in each chapter city, including the Senior Division's all-city event at Carnegie Hall's Stern Auditorium. Annual scholarship galas in Los Angeles, New York and Washington, D.C. will also take place in 2023, infused with the theme of All You Need Is Love. Aligning with the NCC's planned recording projects at Abbey Road Studios and AIR Studios in London, the chorus sets its sights on raising record funds for scholarship recipients while lending special tribute to The Beatles and praising the innovation they brought to music that continues to inspire.

In July, the National Children's Chorus embarks on its 7th international tour to the United Kingdom with stops in Edinburgh, Wales and London. In addition to enjoying the cultural wonders of the itinerary, students of the Senior Division will sing in concerts along the way, collaborating with local choirs in dramatic concert settings. In London, the NCC will sing its premier performance of the tour where students will share the stage live with the world-renowned VOCES8. At the conclusion of the tour, the NCC will spend three full days at Abbey Road Studios and AIR Studios recording music for the organization's planned holiday album that will be released on Spotify and Apple Music toward the end of 2023.

In August, the National Children's Chorus will host its 3rd Vail Opera Camp, led by NCC Alumnus and GRAMMY® Nominee Johnathan McCullough, who serves as the organization's Vail Opera and Operatic Studies Director. Students of the Senior Division will perform the comedic opera The Tinker of Tivoli at one of the most beautiful outdoor amphitheaters nestled at the base of the Rocky Mountains. Young opera campers will study acting, stagecraft, prop making, vocal pedagogy, opera history and the music of Rossini in what promises to be an exhilarating experience, combining top-level performance instruction with fun and thrilling activities in the beautiful outdoors of Vail.

"Looking ahead, Season 2022/23 significantly advances the mission of the National Children's Chorus," said Associate Artistic Director Dr. Pamela Blackstone. "Now more than ever, our vision is to bring children together with the singular goal of music as the ultimate medium for personal growth and self-realization. We know how important our work is within the lives of the NCC's young artists, and strive to make our programs as accessible as possible as we continue building our educational programs."

For more information on the National Children's Chorus, visit https://nationalchildrenschorus.com

About the National Children's Chorus

The GRAMMY® Award-winning National Children's Chorus, under the leadership of Artistic Director Luke McEndarfer and Associate Artistic Director Dr. Pamela Blackstone, has quickly become one of the world's leading children's choirs. Among the most exciting and fastest-growing music institutions for youth in the nation, the chorus provides its unparalleled training to talented singers locally and abroad, with more than 35 choirs and 1,000 students based in the chapter cities of Los Angeles, New York City, Washington, D.C., San Francisco, Austin, Dallas and Boston. Now in its second decade, the NCC's groundbreaking Season 2022/23, entitled Resounding Voices, expands on the chorus' recent success, featuring an array of special projects, demonstrating the organization's firm commitment to eclectic programming, new music, world culture and extraordinary collaborations.