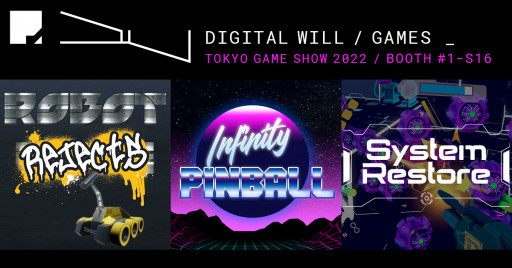 Today, Digital Will revealed their lineup of previews and announcements for the 2022 Tokyo Game Show including demos of two in-the-works titles: Robot Rejects, a multiplayer robot battle arena game, and System Restore, an FPS set inside an infected computer system, and the announcement of a Switch version of the retro hit Infinity Pinball. The games are sure to strike a chord with fans at the event with satisfying gameplay, and distinct visual style.

Fans of robot combat sports will fry their circuits over Robot Rejects, a robot arena brawler planned for release on PC and Switch. Players create and customize their own fighting robot and then pit it against rival bots in an online multiplayer battle arena. The game is packed with steel-on-steel robot destruction, but underneath the saw slicing, metal melting action is an advanced building and customization system that will bring out the engineer in everyone.

This rogue-like first-person shooter transports players inside the world of a computer network that has been taken over by a vicious virus wreaking havoc throughout the system. Players control an elite agent of "SRF," the System Restore Force, with the sole purpose of purging the virus and its corruption. System Restore features fast-paced run-and-gun combat clothed in a cyber aesthetic bursting with vibrant neon colors.

Released on mobile in early 2021, and coming to PC and Mac this fall, Digital Will and Dadako announced that their hit arcade game will also be coming to Switch. With 80s retro style and classic gameplay, the game has struck a nostalgic chord with gamers and has been featured on Apple Arcade's top page numerous times. With procedurally-generated tables, Infinity Pinball offers a revolutionary twist on the genre - a pinball table that never ends!

To try out the games, stop by Digital Will's booth at Tokyo Game Show: Indie Game Area, booth 1-S16, and view the links below for more information.

Smile Digital Health Closes $30 Million in Series B Funding to Progress Innovation as...

TRYST: An Artful Story Collection and Its New Publisher Find a Home on Ethereum